Time for another pick list now that Spring is near. There’s a lot of yellow because I’m tired of being disappointed so I’ll just leave everything as a cautious test until it’s actually airing and I get chance with it. Spring is usually an alright season, and regardless of how many of the new shows end up bad there are several new seasons to shows I already love so it’ll at least not be terrible.

Arslan Senki – I guess this is by the same mangaka who made Full Metal Alchemist, or so I assume from the art and from the fact I think I looked it up before. Problem with that is this author isn’t that great. FMA, and only when adapted into brotherhood, was great but aside that everything I’ve seen from her is pretty shitty. I’ll definitely give it a shot but I’m not expecting much aside a hopefully “alright” show.

Baby Steps 2 – What can I really say other than “sorry for still not writing a review for this”? The first season was my anime of the year for 2014 so I can’t imagine this not being great as well. I highly recommend checking the first season out if you haven’t – and don’t worry about not liking tennis, I think it’s shit but this show managed to make it exciting and intriguing and carry it on the back of incredibly good characters development and a light but very cute romance. That romance is what I’m most excited to see more of – the tennis is great (somehow) but I really hope this season doesn’t spend too long in the Florida arc unless Natchan ends up going there too. With the way season 1 ended and the way Natsu is so sweetly and cutely pretty much leading him into asking her out for awhile now, I want to see something come of it sooner than later.

Denpa Kyoushi – Literally a harem shit about an anime blogging NEET. Self insert shit for losers who also have no taste.

Digimon – I have no problem with this franchise, it just never clicked with me and so I have no reason to pick up a random season of it.

Gintama – Anime of the Year 2015. I mean it’s Gintama, unless it ends up like Enchousen which was pretty terrible in comparison to the rest of the entire franchise (and really not good in general), then I can’t imagine this won’t be fucking outstanding and continue the trend of being one of the best anime ever made.

Gunslinger Stratos – I miiiiight try this so it should be yellow. Based on a PV it seemed like it might be kind of cool, and A-1 tends to make at least nice looking shows.

Hello!! Kiniro Mosaic – I really enjoyed the first season of Kinmoza, the comedy was fairly fresh, the characters likable, and hell it had a fucking pirate musical episode. Yeah, a MOE PIRATE MUSICAL. I’ll definitely be watching this and I’m glad to have a reliable cute school girls show coming around because I feel like it’s been a little bit since a good one aired.

Highschool DxD Borne Identity – Anyone who knows me knows how I feel about this show and it’s awful cg nipples on those non-cg bodies. It goes without saying that the entire series is a massive sack of shit as well, but those fucking nipples, man.

Houkagu no Pleiades – The last time I watched a series sponsored by an automotive manufacturer it was actually pretty damn good (One Off). I’m gonna give this a shot too purely because of that. Besides, who doesn’t like Subaru? Apparently there was an OVA already but I haven’t seen it.

Kyoukai no Rinne – I don’t know anything about this except for the fact the girl in the image is incredibly familiar and that the manga is from Rumiko Takahashi who I don’t have much experience with but definitely am aware of. I’ll be trying it out, but if it’s like any other adaptation of her works it’s going to be a million episodes long and I’d rather just watch Inuyasha instead at that point because I’ve still yet to see more than the random episodes I’d watch from time to time when it was airing on TV when I was a kid.

Mahou Shoujo Lyrical Nanoha ViVid – I have a feeling I’ll really enjoy Nanoha, but the fact is I haven’t watched any of it so this gets to wait until I do.

Mikagura Gakuen Kumikyou – I don’t trust anything that originated from a vocaloid song. There’s not a single exception to them all being shit so far and I don’t care to keep trying to find one. And don’t say BRS – that was originally a random character HUKE drew before being turned into a song and then the anime, manga, games, etc. 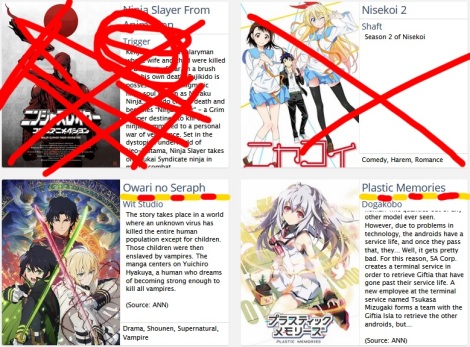 Ninja Slayer From Software – Anything by Trigger triggers me because absolutely everything they’ve done is pathetic pandering fucking garbage. I’m not trying to be edgy or bait by saying that and it’s something I’ve said since they first showed up in the industry. They have yet to create a single thing that had any substance. However putting that entirely aside, this just looks terrible and is not the type of show I’d be interested no matter who made it. So this gets a double no.

Nisekoi 2 – To be honest I plan on watching the first season even though I hate harems, but for now this is a no.

Owari no Seraph – Rolling Girls aside, Wit is a pretty good studio from what little they’ve made under this subsidiary name. I don’t see a reason not to give this show a chance aside the fact that it really seems like it’ll be total shit. But hey, it’ll look pretty at least (Wit anime is almost always nice to look at – again with the exception of Rolling Girls) and maybe it’ll be alright.

Plastic Memories – Another show I haven’t researched at all aside that little bit of info in the image. It sounds like it could really be a touching or interesting series, but I’m afraid it might be some ecchi shit or something. I’m cautiously interested. 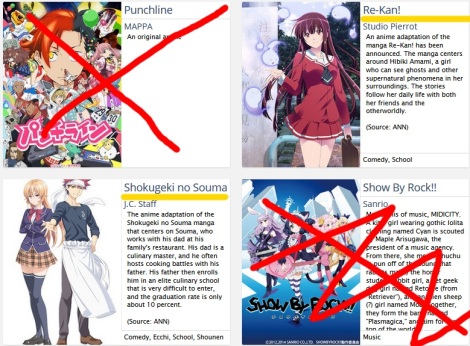 Re-Kan! – The girl’s character design reminds me of Bakuman (if the manga is by the same guy then that’d explain it I suppose) and lately I’ve been watching a shit ton of shows dealing with spirits and loving all of them. The theme fitting my current anime interests helps, but I just think this sounds like it could be unique and so I want to give it a shot. A sort of slice of life with spirits and people isn’t something that hasn’t been done, but almost all of them have more heavy elements – this kind of sounds like it’s more just fun which would be fairly different from most shows of this style (almost all of them end up being drama on some level or having a lot of bittersweet stuff). The fact it’s based on a 4koma seems to reinforce that.

Shokugeki no Souma – I just want a regular fucking cooking show. Not a contest, not a battle, not a “I’m having an orgasm and remembering the wheat fields mommy took me to as a child back in Wisconsin when we visited America in 2006 before Grandpa died”, and definitely not ecchi eating fanservice bullshit. That is something I’ll never actually get. This might still be a fun show though so I’ll try it.

Show By Rock!! – I put quite a bit of red but the more I think about it the less I’m sure it needs all of that. It’s a Sanrio deal so it’s probably actually going to be pretty fucking cute and something I wouldn’t mind watching way later some day on and off every now and then.

Urawa no Usagi-chan – Much like car sponsored shows, I haven’t seen an anime sponsored by a prefecture that wasn’t at least somewhat enjoyable, so I’ll give it a shot

Vampire Holmes – Nothing to say really, just not interested.

YAHARI NO YAPPARI MY SISTER CAN’T POSSIBLY BE RIDING MY DICK BECAUSE THE 30 OTHER GIRLS THAT LOVE ME FOR NO REASON ASIDE THIS BEING A HAREM AND ME BEING AN EMPTY BLANK SLATE SELF-INSERT FOR ABSOLUTE SHIT OTAKU TO PRETEND THEY ARE IN A FANTASY ARE ALREADY ON IT VERSION 304.7B SEASON 2 – No.

Battle Spirits – Not my type of show.

Etotama – Looks cute. That’s all I know and it’s why I’m just trying it and probably going to drop it. My worry, and I’m about 90% sure it’s the case, is that this is going to be ecchi shit.

Duel Masters VSR – Not my type of show. 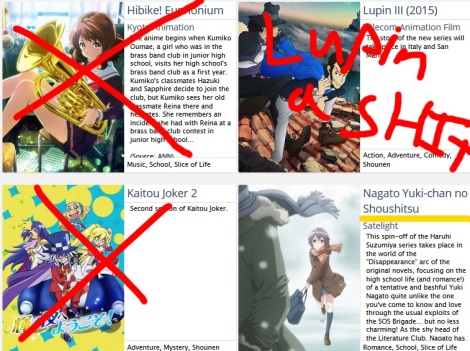 Hibike! Euphonium – The story already sounds fucking awful, the character designs look like shit, they already have resorted to fanservice in some of the promotional content, and KyoAni is on a very long streak of awful pandering vapid turds. This has at least an 80% chance of being another one of those, especially when you consider the fact that they are reusing the same resources and shitty pandering strategy as everything they’ve made since the end of 2010.

Lupin III – The only thing Lupin ever did good was be the name of that cute dog in Inubaka.

Kaitou Joker 2 – No thanks.

Nagato Yuki-chan no Shoushitsu – I don’t like the Japanese title for it but this fixes everything wrong with Haruhi: the lead girl. Yuki was both very much hinted at as being the actual God rather than Haruhi throughout it and what I’ve read of the novels, so it’s about time she got her own show. Sadly this is the girlish and emotional Yuki, not the kuudere, so I can’t say how much I’ll enjoy this as I still haven’t seen the movie so haven’t really met this version of her. I’m definitely interested though. 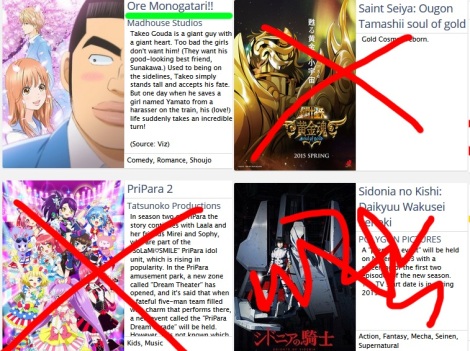 Ore Monogatari!! – I’m actually really looking forward to this one, it sounds unique and like it could be both adorable and very fun. I also find it interesting that the lead character is a male even though this is a shoujo – not that it’s unheard of but it’s still pretty uncommon.

Saint Seiya – I’m not from Mexico.

PriPara – No, thank you.

Sidonia – This show’s first season has incredibly ugly and poorly done CG art and animation for the entirety of it. It’s straight up fucking ugly. On top of that it’s pretty fucking lame so even the content doesn’t save it, I’ll pass on season 2.

Uta no Prince-sama Maji Love Revolutions – Season 3 of a show I’ve seen 1 and 2 of and thought were fine, no reason not to continue unless they drop the fantastic and really unique art it’s always had or toss Miyuki Sawashiro out of the lead role.

Yamadakun no Harem no Thanks.

Well, that’s everything. This seems like it should be an alright season but aside the new seasons of old shows I’m not seeing much that really jumps out at me aside Ore Monogatari. Everything else I’m trying out seems like it’ll be alright to pretty good at best and a handful are things I can already tell are likely going to be total shit. Not bad though and I’m definitely excited for said new seasons, especially when it comes to Baby Steps. As much as I love Gintama I just don’t feel the same anticipation for it as I do for more Baby Steps (especially not after Enchousen), but yeah.

Anyway, that’s what I’ll be trying out. Expect an Early Thoughts post after they air a few episodes of most of these, as usual. It’ll be awhile though, the season doesn’t start for a bit still.