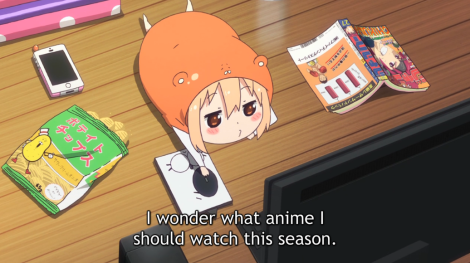 Well, time for another season. This one looks like it’s pretty much a mix of two things – new seasons for shows from several years ago and otherwise leftover crap that wasn’t good enough to put out earlier in the year. There are a handful of things I’m going to try out and I’m sure I’ll try some stuff I had no intention on looking at if CR gets it as I always end up doing that, but for the most part there’s nothing really here based on what we know right now. Maybe there’s something good hidden away, you never know. I’ll tell you now I have basically nothing worth saying this time around and did little to no research because nothing this season grabbed me enough ahead of time to look into it – but if you want to see my picks for this season here you go. 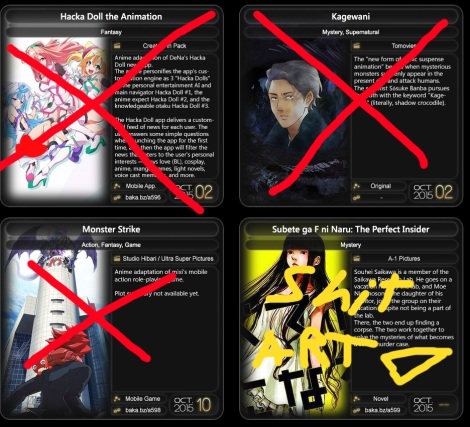 Subete ga F ni Naru sounds interesting enough but I’m still turned off by Asano doing the design work for it, he’s a godawful writer and his art isn’t much better than his ability with words…but that side of things ends up coming down to how the animators make it look. Anyway, an ugly anime isn’t a bad one by default and luckily he’s not writing this, so I’m hoping for at least an alright mystery out of this one but I’ve got no sort of expectations. Mysteries are pretty easy to screw up too, but we’ll see. 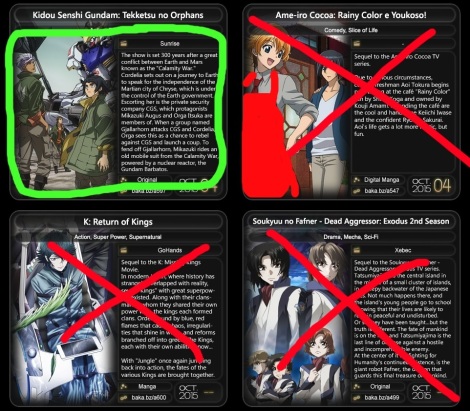 The new Gundam is being written by Mari Okada and while she’s had some misses (mostly back in the day), she’s typically phenomenal when it comes to original works of her own and pretty damn good at writing up adaptations as well. I’ve never seen the few mecha show she’s worked on before, so I really look forward to how her very character-focused style will be used here. I haven’t watched a Gundam in ages (though I’ve meant to try the one with the hot mom for awhile now) so that’s also another reason I hope this ends up good. I’m not a big Gundam fan in the first place, but I don’t hate anything aside the very early ones. I’ll also say I like the very AoT reminiscent look to the clothing design. 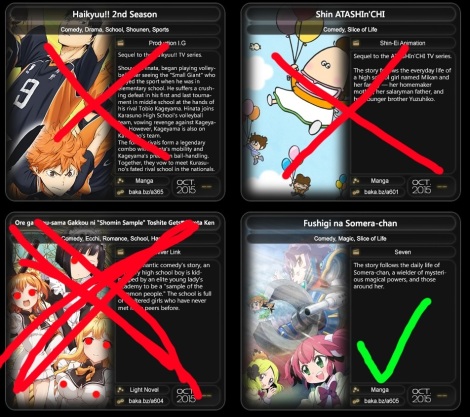 Fushigi na Somera-chan – what is it? Who knows! It’s the same wacky as fuck crazy shit as the last show that looked identical to this; Ai Mai Mi, which was fucking hilarious and very unique. Hope for more of that here…and based on what little there is to see of this now it looks like it’s exactly more of that. 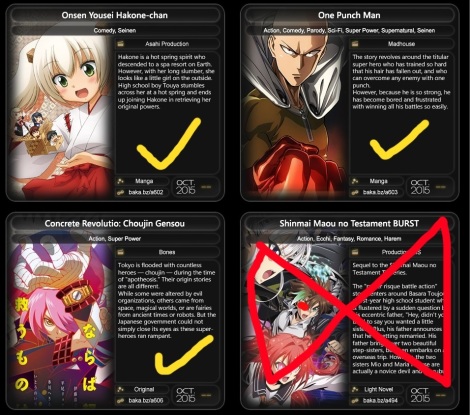 One Punch Man – I’ve heard a lot about the manga for this one and that it’s pretty awesome and funny. Thing is, that mostly comes from people who actually unironically enjoy the things that it’s satirical of which makes me worry if I’ll get anything out of it when I just absolutely hate almost all of them. Certainly going to give it a try though, it’ll either hit or miss within the first episode probably for me and I purposefully avoided any stupid pun there.

Concrete Revolutio(n): Choujin Gensou – Sounds a bit like “the show that shall never end” Kekkai Sensen, may as well give it a shot.

Seraph Season 2 is, of course, something I’ll be watching. The first season was really great and left us waiting after a big battle and a lot of huge reveals about characters and some bad shit going on in the background. It also finally got around to making the viewer wonder just how “good” the humans actually are.

Heavy Object I’ll be giving a sure shot but I don’t exactly have high hopes. Kamachi has time and again proven he’s a total no-talent shitter, but I want to give him a chance again. His ideas aren’t the problem, it’s how they’re implemented. The implementation here is up to J.C. Staff – the only question, and worry, is will it be Railgun or will it be Index? 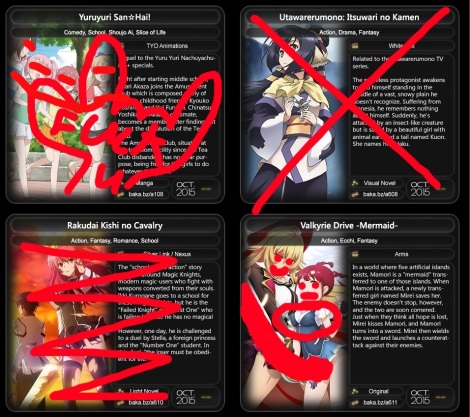 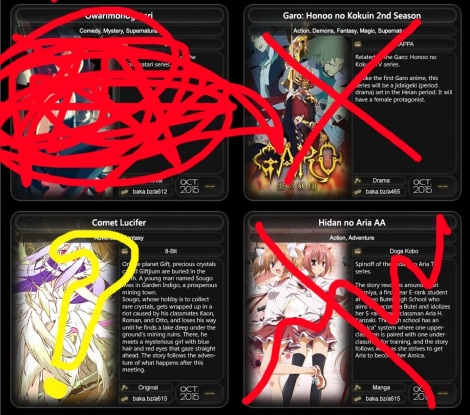 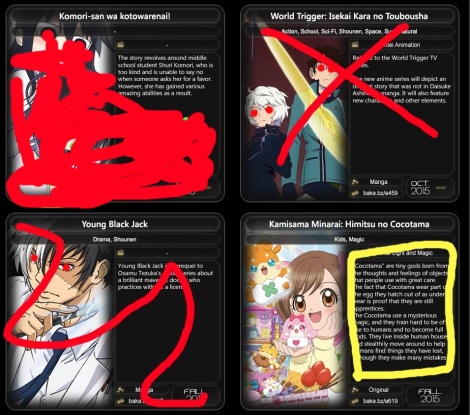 Comet Lucifer I know nothing about but why not.

Kamisama something cocotama is something that will be on my PTW for ages to come, it’s not something I really plan on trying now. Yes, I like cute girly kid shows sometimes, fuck you. 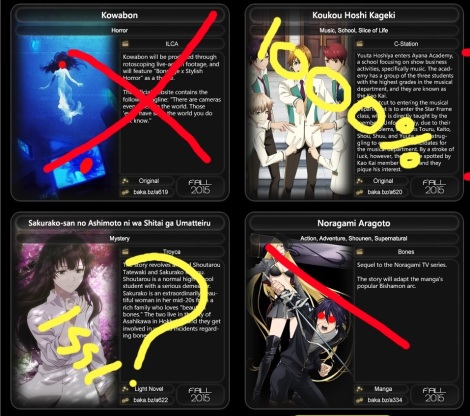 Koukou Hoshi Kageki sounds an awful lot like UtaPri minus Haruka. Could be a fun but distinctly faggy show. No reason not to try it out given I actually like UtaPri anyway, but I’m not a massive fan either  (I think I rated it like 6/10) as I’m not fujoshi enough, so this could be something I never finish or don’t even watch if the quality isn’t good enough to begin with.

This other sakurako-san show about a middle aged woman and a teenage boy just sounds like it could be full of obnoxious fanservice, GOOD fanservice, or actually be a good show with a really weird concept. I don’t fucking know. I’d say I actually hope for a more slow moving character focused show that’s about these two characters with some weirdness from the main focus. 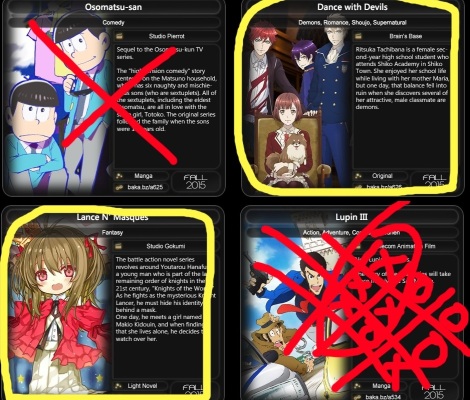 Dance with Devils is another show that seems very reminiscent of something else – in this case rather than UtaPri, this seems to be very similar to Vampire Knight which is a show I happened to REALLY enjoy. Instead of vampires the guys here are demons, and surely this won’t even be the same genre as Vampire Knight which was pretty serious drama, while this seems more like a…I dunno, even if there’s drama it won’t be the same type of literally people dying and rapey stuff and whatnot as VK. That’s not a bad thing, just saying it has a certain appeal to it for seeming similar, but it definitely will be different so I’m not going in expecting anything similar aside the premise. The girl looks cute and has a dog too.

Lance N’ Masques – I heard some music in a PV for this and it felt very Gust-like which made me interested. It seems like an average kids show from what I can tell with kind of a bad budget, so this is another “ptw forever” situation, I probably won’t even be trying it. I also just noticed there’s an ugly unicorn thing in it so maybe I won’t ever.

Shows I’m trying that are not pictured because this chart was out of date:

Gakusen Toshi Asterisk – supposedly an ecchi harem, and I hate those, but sometimes they’re actually enjoyable. With how this season seems I’m willing to at least TRY it if it happens to be on CR. If it’s not on there, unless I hear great things, I likely won’t be bothering.

JK-Meshi – I have no idea, and sadly I feel like this will not have any subs anyway.

Taimadou Gakuen 35 whatever else the title is – This is without a doubt an ecchi harem…but I kind of like the premise aside that. If it’s on CR I will try exactly 1 episode before deciding what to do with it, if it’s not on there I’m not touching it.

Sorry, both the fact its typically 85-90 degrees here at night lately and humid (and worse during the day, breaking 100 regularly), and the lackluster chart, I don’t have all that much to say. Of course there will be a lot more opinions to spew once I get around to trying some stuff out, so look forward to an early thoughts post in the future. And again, I might try plenty of those reds, depends what I feel like doing. 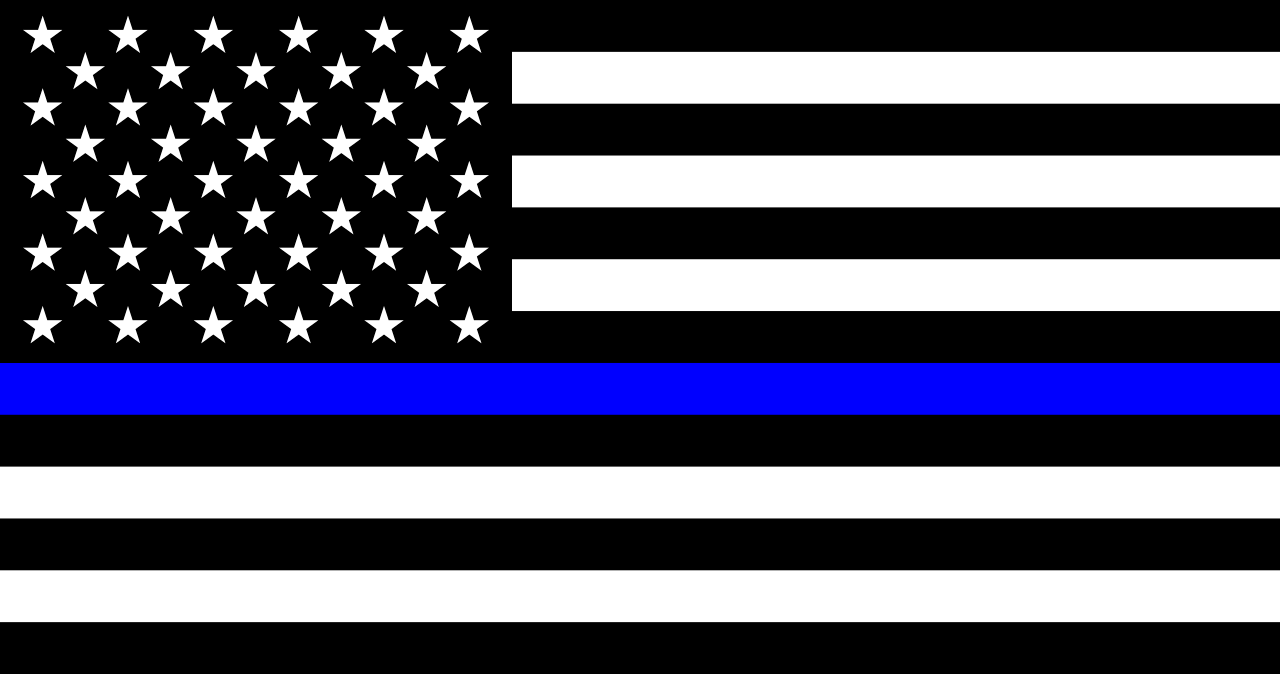