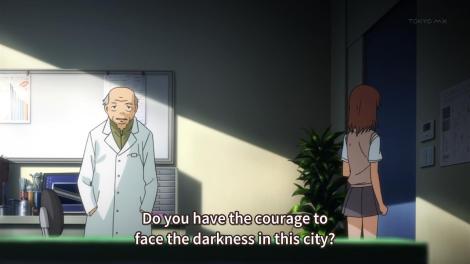 So, after around 16 episodes of pure darkness and extremely heavy, depressing, and legitimately hard to watch episodes dealing with really serious shit and putting Mikoto through the most fucked up stuff possible (even watching herself be killed in multiple ways), Gekota-doctor apparently still thinks this is a question that needs asking. Oddly enough, he asks this now when what he’s talking about is far less bad than what she’s gone through already. All the experiments and murdering of thousands of herself is a lot worse than a group of nerds trying to kill people out of jealousy.

Anyway, with the Sister’s arc done and the consequences of it settling down, the show brings back the themes of friendship and camaraderie that Railgun worked with so well in the previous season. While Mikoto has proven capable of carrying the show on her own in the Sister’s arc, it’s just not the same without the whole gang getting time to shine. The Silent Party arc not only brings back the usual suspects, but adds in Kongou Mitsuko as a primary member of the group as well, which is a welcome development. Along with her, almost everybody from season one reprises their roles – even Therestina, the eventual main antagonist of the Poltergeist arc, plays an important part in the story.

This cast made up of almost every big and small player in the story, along with literally hundreds of Judgment members (which was fucking awesome), manages to give the final episodes of this series an incredible and memorable note to end on. 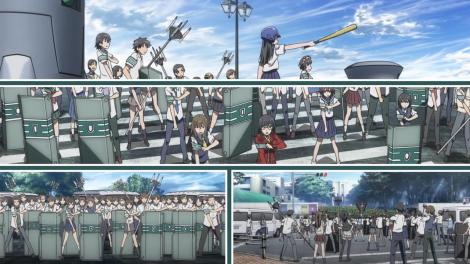 Obviously, after what was just a fucking incredible story arc this arc does pale in comparison. The Sister’s arc was something that, especially in the context of knowing Railgun up to that point prior, is just so amazingly well done that there isn’t much that CAN compare without coming out looking a little ‘eh’. Every aspect of that arc was fantastic and the line delivery, cinematography, and direction was some of the best that the industry has ever seen. It’s really annoying to see people bitching that this isn’t ‘as good’ and thus magically sucks. Of course it’s not as good, they pulled off something most anime never will and rarely ever have – there’s no way they’d keep that up forever.

I actually felt this was an very good way to end the show though, and I really loved that they also made sure Nunatoba was given true actual closure.  In the manga she just disappeared with no explanation after she gets caught in the sister’s arc – there’s no implications of what happens, no mention of her again, nobody even remembers she existed. This was yet another instance of Komachi being kind of amateurish in his writing – and at the same time, yet another instance of JC Staff showing just how fucking good their writing team is at filling in those holes in and really bringing the canon to a higher level than what the manga reaches. Not to say the manga is bad at all, it’s great, but the show is simply much better – and a lot of that is thanks to the writing team. 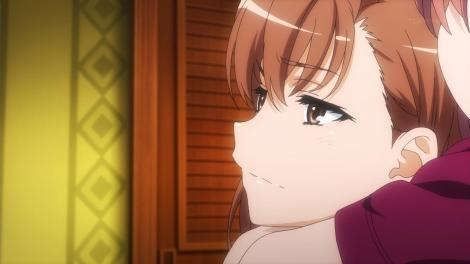 And because of Rina Satou.

Before I end up just going on about the final episode, I would like to say I actually thought this arc overall was really well done. It not only added to the canon and fleshed out many details and plotholes the manga just ignored, but it really gave room for the entire cast to back up what they felt and said the entire Sister’s arc with action while also showing some good maturing on Mikoto’s part. The entire Sister’s arc made a big deal about how she was forcing herself to deal with it all alone in secret. This time though, she almost does that again, but she understands she can’t handle it alone AND that because her friends all care about her so much they’d rather be at risk by her side than her going through horrible shit alone. She grew up a bit from the Sister’s arc and realizes it’s not only okay, but sometimes the right choice to rely on those who care about you – otherwise you not only put yourself at risk, you hurt and worry them. 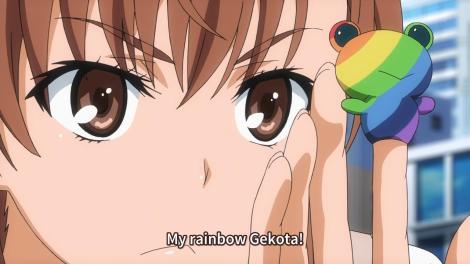 There was also a very big helping of Gekota and Biribiri stressing out about how to get her rare pink one back.

Along with that, it was pretty interesting. I didn’t like Febri at first, but she was a good outlet to show Mikoto’s motherly and sisterly side (she came off as both with Febri) that she can’t have with the clones, and over time she did grow on me. She also served as a good way to create what essentially was an arc dedicated to giving Nunatoba closure, even though that went missed by many of the viewers.

The arc as a whole though, not just the story elements, was very well done. It was a great mix of fun, a healthy does of silly hijinks, moe moe Mikoto (and Gekota), and large scale action with nearly the entire cast of the Railgun franchise thus far taking part in one way or another.

Now the ‘just going on about the final episode’ part. The finale was far better than what I ever expected and easily outshines the ending of the first season and even, in some ways, is better than what the Sister’s arc delivered in it’s last episodes. What I mean is simply in excitement and feeling pumped up – it was awesome and full of well done action and really cool scenes. Of course, the Sister’s arc finale was far better in terms of emotion, impact, and most other aspects, but it was (on purpose) not as ‘loud’ and crazy at all as this. Even the last scenes in the fight against Accelerator were more focused on the deeper more emotional side of things, which was perfect, but it left the show without a more fired-up conclusion. I see a lot of people who simply like to hate on anything (indexfags mostly) claim the show should have ended after the Sister’s arc – but I’m damn glad it didn’t. Not only would it have felt like it was missing something integral to Railgun, it would have just been horribly depressing.

This pulled all the story strings together, gave them closure (unlike the manga), and gave a fantastic blowout with an all-star cast showing off their stuff for a finale. We got Kongou launching a fucking massive mecha into the edges of the atmosphere, the swim team girls water boarding around on the streets, Judgment GOING FUCKING HAM ON EVERYTHING, Kuroko just destroying fuckers left and right, a nerd putting a gun to his own head, Biribiri railgunning the shit out of that same mecha pretty much in space, and a super touching scene with her falling into Kuroko’s arms.

Oh, and THE ENTIRE EPISODE WAS INSERT SONGS. There were literally only a few minutes the ENTIRE episode that didn’t have one of the opening songs playing. That’s not an exaggeration, you can check yourself. It was fucking great.

I also have to say, I’m surprised at the huge lack of actual fanservice aside from shitty mcslutbutt in the final episode for no reason. I was worried enough to write a massive post about it before – and also stated that I was likely overreacting because JC Staff has shown to really know these characters and not force them into situations that don’t fit them. And, well, I was luckily right. Mikoto wasn’t given any fanservice really, and even in some scenes that could have ended up that way – it was always avoided or purposefully drawn in a way that was further away or entirely non-erotic, while in the same scene characters like Mii and Saten were very detailed and sexied up. I’m very happy with them for keeping Biribiri within her comfort zone and personality, and I shouldn’t have doubted they’d keep to it after doing so well about it in season 1 after that first episode. 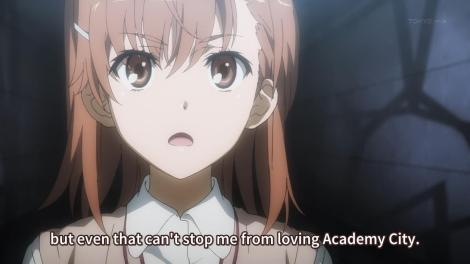 Not even the mass slaughtering of herself thousands of times!

Overall, I can’t agree with any of the complaints. I fucking loved this arc – not nearly as much as the Sister’s arc, but this was really damn good and far better than the Poltergeist and most of the Level Upper arc. I can’t imagine a better way for them to have ended this show while retaining the ‘feeling’ of Railgun. This felt perfect for the cast, for the series we’ve come to know and love the past two seasons, and for one of the best franchises in the medium. It just felt right. The love and huge effort put into it was very evident, and the familiar air of Railgun was there in every way from the action, the jokes, the wonderfully cute and sweet moments, and the over the top crazy finale with no real reason aside showcasing every character and giving one last excuse to showoff just how incredible Biribiri is. It was Railgun at it’s purest, and I loved it for that.

There’s no doubt that more seasons are on the way, even if not for a couple years, but I’m looking forward to it already. 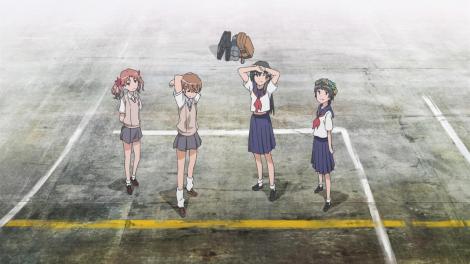 See you next time ~Biribiri!