I’m a big fan of K-ON but I ended up putting this movie off for quite a while – not on purpose, I just kept forgetting to finally watch it. Well, all in all it felt like an extended episode of the show – and I wouldn’t have it any other way, doing anything else simply wouldn’t have been the K-ON I know and love.
However, given there are plenty of good points and they get brought up everywhere, I’d like to focus on the negatives first and then move on;

There are a couple things I think could have been done better, but one thing was just extremely bad: Azusa. Not her as a character, she is admittedly my least favorite, but it has no bearing on this. What I mean by Azusa being a negative is about halfway into the movie she acts entirely out of character – totally and unbelievably in a way that isn’t like her or anyone else in the cast. Even a person who has never seen K-ON before would notice this even just while watching the movie. While in her hotel room with Yui, Azusa sees a notebook saying something along the lines of loving Azusa, written by Yui. Now remember, this is after 2 fucking seasons of Yui being Yui with Azusa – constantly saying she loves her and being very physically affectionate with her – so her having something like “Azunyan Love” written on a paper wouldn’t really be surprising…but oh, surprise surprise – AZUSA SUDDENLY IS SCARED SHITLESS even calling out how creepy it is and hiding very seriously in her bed without much sleep at all because she apparently feels so in danger around Yui.

But no, it doesn’t stop there, she continues acting detached and creeped out by Yui for half the trip, acting like she’s disgusting and scary and even very clearly avoiding her and being as far as possible from her at all times. Then, to make it all at least ten times worse, when they go back to the hotel, Yui excitedly runs for her guitar but looks to be going to Azusa in a FULL OF YUI LOVE way – and what’s Azusa’s reaction? Elbowing her, hard, right in the fucking abdomen. And then yelling how she “isn’t into that sort of thing!”…are you fucking kidding me?

Why? This scene makes no fucking sense and is written HORRIBLY. I mean it’s REALLY bad, the entire situation and especially this climax of it are so fucking nonsensical that it really killed half the film for me and is the direct cause of me rating it lower than I felt it was the rest of the time – because this is such a poor directing and writing choice it really impacts the overall experience.

Yui is ALWAYS LIKE THAT and even IN THE FILM the entire time she’s like that – but then once she sees a piece of paper with the SAME SHIT YUI ALWAYS SAYS OUT LOUD written down she suddenly fears…rape? And literal rape, not joking lol kidding rape, but actual fucking hold you down and have my way with you while you cry and whimper for help rape. She legitimately believed Yui was going to fucking rape her to the point she PHYSICALLY ASSAULTED HER to protect herself.

I just can’t get across what a gross misunderstanding of the characters and their relationships whoever wrote that part had to have – because there’s no way it’s the same writer as the rest, it’s just not fucking possible because not only does it entirely pretend the earlier entire parts of the movie never occured – it entirely erases the series too, because there’s no way she’d believe that other than if they JUST MET that fucking second.

Look how much I wrote, hell, there you go my fucking K-ON movie review I don’t even have it in me to touch on all the amazingly positive points with this on my mind. It’s a movie that was great, the music was good like always from K-ON (yes, K-ON has music), the animation was fucking outstanding, and overall it was a really nice and fun way to end the animated version of the franchise.

But Azusa ruins it and even after enjoying the rest of the film, if it wasn’t obvious from all that text, that shitty part in the middle is still the thing most prominent on my mind from the entire 2 hours. It’s so out of character and just so blatantly ignores their relationships and personalities that were established for like an hour already AND a previous like 30 fucking episodes that it’s just not something you can wipe off your mind and forget about. Especially not when the entire sequence dealing with it takes up at least a quarter~fifth of the movie. I even talked to an avid Azunyan fanboy and he didn’t disagree that the whole thing was out of character and stupid. It’s shit. 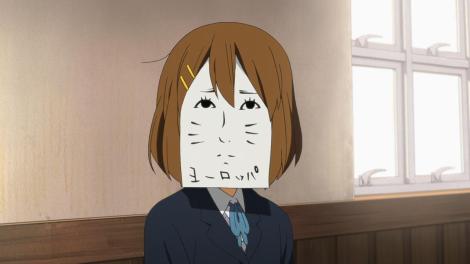 If you’re a fan of K-ON, obviously watch this, it was really good and seriously the animation is just fucking perfectly done and the highest quality you’ll find. Everything aside what I mentioned was very fun, light hearted, and full of the girls being their usual selves and it really wrapped up the whole series with a good feeling of closure. The performances were okay, I was a bit let down by the finale song given I’ve heard it before and never liked it so it kinda made the ending ‘eh’ for me, but everything else was really great. Just yeah, having that whole group of scenes I mentioned hovering over all of it…I dunno. Maybe I’ll write a secondary review later on when I can get over it.

Oh, and Ricchan was as amazingly cute as always. If I write another review it’ll just be as an excuse for more pictures of Ritsu.